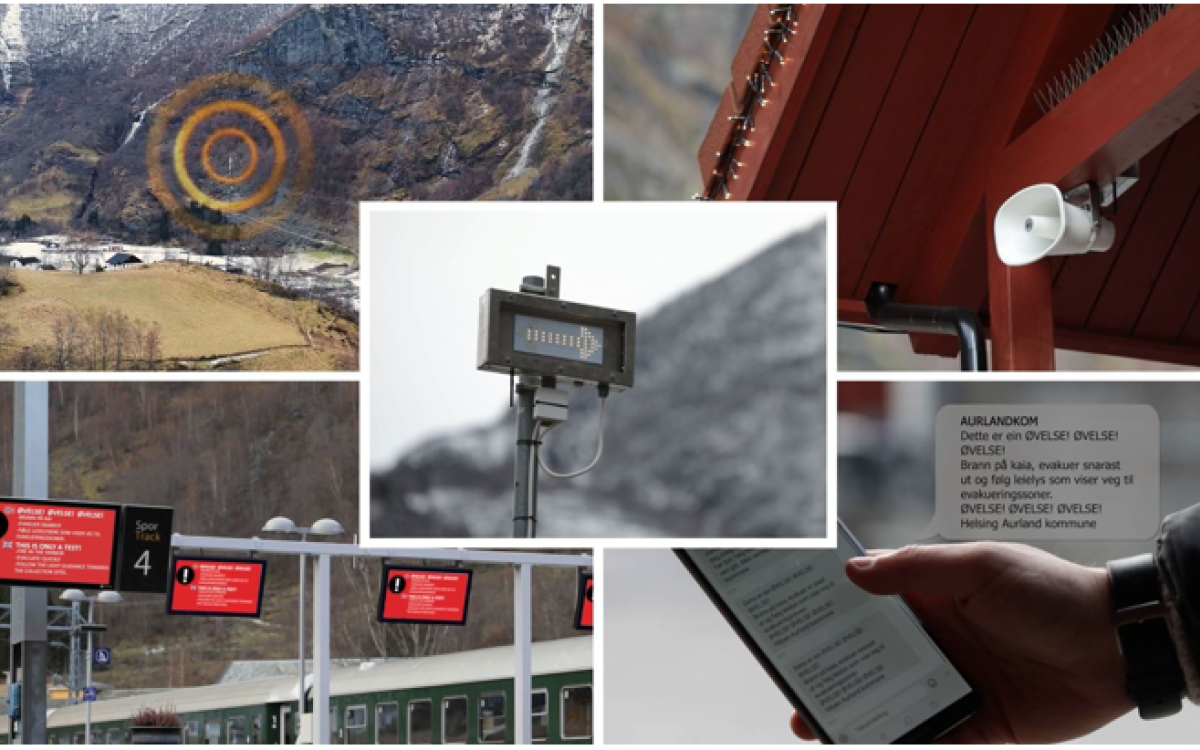 A multi-platform approach lies at the core of the R&D projet Public Warning System. WNRI's main role is within testing and evaluating.

When something happens, warning the public is a key objective. A new public warning system is due to be tested in a new, large R&D project. The system is developed by an enterprise in the region and aims for national as well as international markets.
– This project ties together the three main areas of research at WNRI, says Anna Maria Urbaniak-Brekke, WNRI's coordinator.

By Idun A. Husabø

The public warning system is designed to inform the public and facilitate efficient evacuation from any danger or crisis situation, ranging from natural hazards to industrial accidents and terrorist attacks. Warnings in the form of text messages to mobile phones in a given area has gradually been introduced in the past decade. However, as the current approach to public warning has several weaknesses, a new system for public warning based on digital audio broadcasting (DAB) technology is presented as a supplement.

No efficient system in place

"The government is in need of a satisfactory system for public warning", says Geir Gjørsvik, managing director of Paneda, the enterprise which brings its technological product into the large research and development project Public Warning System.

The total budget of the project is NOK 18 million, chiefly funding from the Norwegian Research Council as well as the partners. In addition to researchers from Western Norway Research Institute, three companies take part: Telenor, Fram Web, and Tectal. The project is also carried out in cooperation with Vestland County Governor, The Norwegian Public Roads Administration, and Aurland Municipality.

One reason why the present system of public warning may be considered incomplete, is the fact that the mobile network often falls out when the need is greatest, e.g. during extreme weather events, power outages, or when a great number of people use the network at the same time, leading to overload. Another problem is that people who are not listening to the radio, do not carry a mobile phone, or are not in possession of a mobile phone, are left out.

In addition, the long response time of emergency units may cause a delay in evacuation from the danger zone.

What started out as a good idéa and a small start-up in Selje on the Norwegian west coast, has grown into a vigorous enterprise with great ambitions. Promisingly, the public warning system is unique on the global market.

Also, they utilize the existing DAB infrastructure, which has national coverage in Norway. Abroad, it is also in place in several countries.

"This infrastructure is considered the most robust network in Norway. In addition, we are securing it against hacking" says Gjørsvik.

Whereas the authorities used to issue public warnings via text messaging and automatic phone calls to landlines, the system Paneda works to introduce is a DAB-delivered, mulit-platform system which will reach mobile phones, radios, social media, as well as directing people on what to do via information boards, road blocks, social media, lighting, loudspeakers, and sirens.

This way, in a matter of seconds, the authorities will be able to reach a much higher number of people than today.

"The warning system can be activated on a national, regional, as well as local level", Gjørsvik explains.

Imagine walking along Bryggen, the historical harbour area in Bergen, during Tall Ships’ Races, at a time when tens of thousands of people from across the world are having a good time in the harbour area. Suddenly something happens which causes everyone to want to get out of the area as fast as they can.

Chaos could be the outcome, but with the new system of public warning in place, the police would be able to start the evacuation process immediately after pressing the activation buttion. Sirens and loudspeakers placed in the harbour area would be providing information in several languages, directing people on what to do. Lights would help people see what direction they should walk in to reach their designated evacuation zone. Road blocks would be activated to prevent undesired vehicles from entering the area. Traffic lights would be manipulated in order to halt all traffic into the city centre.

At the same time, a text message is issued to everyone in the area. Key personnel in Bergen Municipality and everyone else who should be warned in such situations, receive another text message. These measures are only some of the measures that could be set up by the municipality in accordance with the preparedness plans.

"During a crisis situation, three aspects are essential: the network used by the warning system must be robust; people must be warned via several different platforms; and the authorities must, within seconds, be able to reach the entire country", says Geir Gjørsvik.

Some work remains before Paneda plans to launch its public warning system as a candidate for a national system of public warning. The authorities are planning to get such a system in place, and PWS is quite likely to be a strong candidate.

Over the next two years, WNRI's part in the project comprises testing, evaluation, and suggesting adjustments. In 2021, a trial will be held in a limited geographical area, and the researchers involved will be carrying out interviews with people who received or observed different types of warnings, e.g. to provide insight into how they perceived and understood the alert and the message that was issued.

"In addition, WNRI will contribute in the attempt at launching the public warning system internationally. Our institute has more than 20 years of experience from international R&D projects and involvement with the EU network in our region", says Øyvind Heimset Larsen, a researcher at WNRI. The PWS project, he explains, is one of very few large IPNs (innovation projects in commerce) where enterprises in the former county of Sogn og Fjordane take part.

"Resources from another large Research Council-funded project, Teknoløft Sogn og Fjordane, were decisive in mobilising the partnership to really go for this application", says Larsen.

A topic of high relevance

Western Norway Research Institute comprises three main areas of research: technology and society, tourism, and climate and environment. Approximately a decade ago, the institute's climate researchers joined the County Governor of Sogn og Fjordane in testing an early warning system in Aurland, the very same municipality that is currently a partner in the PWS project. The topography of the area - narrow fjords and high peaks - is visited by several hundred thousand tourists every year, and channels a lot of the traffic between eastern and western Norway.

The list of potential crisis situations is long: Severe tunnel fires have taken place in the near past; the area received a high number of tourists, and the dramatic landscape is prone to landslides and flooding, a recent example being the flood in Flåm in October 2014. The municipality has spent a lot of resources on mapping an unstable part of the mountain Stampa in case a landslide is imminent. An increase in precipitation as a result of climate change is likely to cause an increase in climate risk in the area, as rain and ground water level may contribute to triggering landslides.

"This project is perfect for WNRI because it links all of our main areas of research", says Anna Maria Urbaniak-Brekke, who will be coordinating the institute's contribution.