Inspiration-seeking at the International Green Week 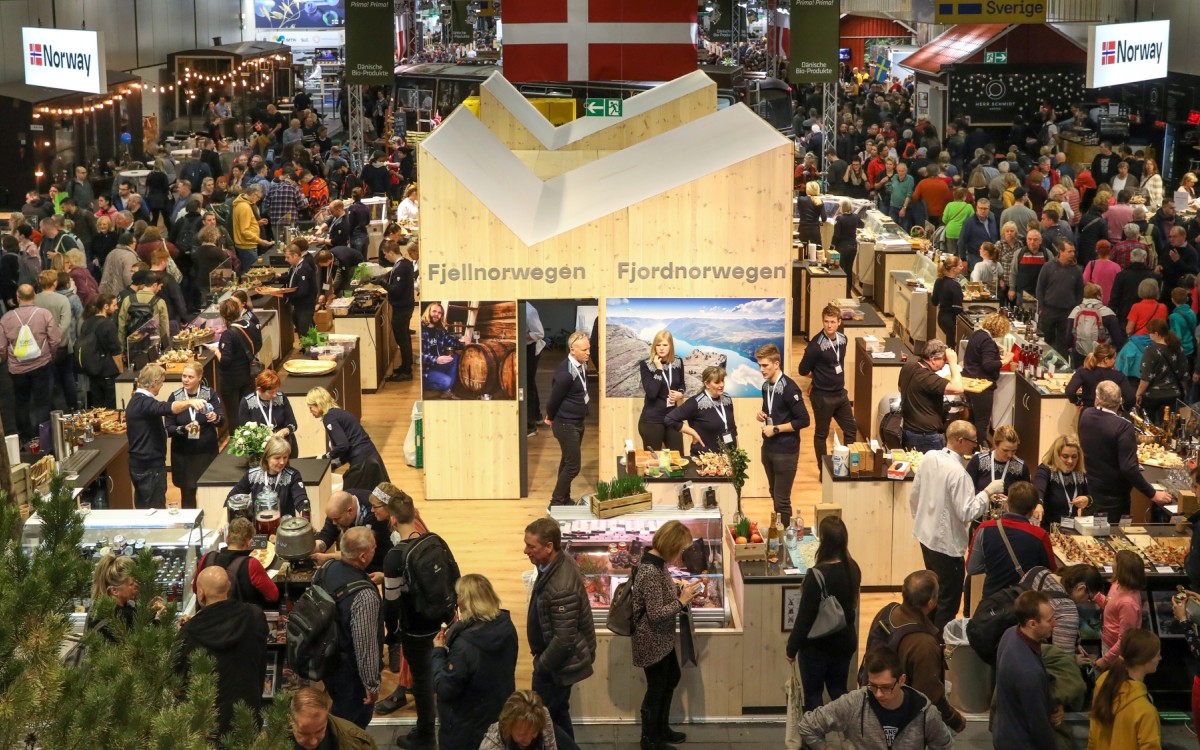 Western Norway Research Institute visited the International Green Week in Berlin as part of a regional study tour. In an ongoing process to establish a business cluster in the intersection between local food, outdoor activities, and tourism, the institute finds a role in research-based innovation and knowledge-building.

The region of Sogn, promoted under the heading "Fjord Norway", is no newcomer at the exhibition, but several of the participants on the study tour were at the exhibition for the first time, including Anders-Johan Almås, the Managing Director of Western Norway Research Institute, who was impressed with what he experienced.

– The exhibition was very diverse, and it was particularly interesting to see how the more than 60 countries disseminated their traditions, promoted agriculture and food in connection with tourism, says Almås. His colleague Ivar Petter Grøtte, the Head of Research for Technology and Society, accompanied him at the Green Week.

The study tour in which Almås and Grøtte took part, is a part of a greater effort to set up a local or regional cluster in the region of Sogn, in the intersection between local food and beverages, cultural heritage, as well as adventure tourism.

– Several ongoing processes in the region can be enhanced through more co-operation, says Ivar Petter Grøtte.

When it comes to the role of Western Norway Research, the process of establishing cooperation will require innovation and knowledge building. The long-term goal is to seek admission into one of the business cluster programmes of Innovation Norway, such as Arena.

– We hope to build professional competence in this field, says Harald Blaaflat Mundal of Lærdal Grønt, an association of fruit, berry and vegetable producers in Lærdal, who organised the study tour together with Sogn Næring, a regional business association based in Sogndal.

– Look to the best regions

Several of the enterprises and associations who went to Berlin, are likely to be part of the future regional cluster. This includes Lærdal Grønt, Sognefrukt, Bratt moro, a group working to develop the Hodlekve area, the Municipality of Lærdal, Lærdal Business Association, and Western Norway University of Applied Sciences (HVL). The organisers asked the participants to pay particular attention to the best, or most professionally promoted, regions at the exhibition.

Such impressions from Berlin will be highly useful in the years to come, as Sogn moves forward in the effort to promote food and beverages, activities, and a healthy lifestyle.

– We are still in the early days, and we need to develop more knowledge. This is why the role of Western Norway Research Institute is a key requirement for success, says Torgeir Skålid, the manager of Sogn Næring.